ADHD is the most common behavior disorder affecting American children, affecting over 4 million.  Although once thought to only affect children, it has now been shown that it is genetically passed from one generation to the next and continues into adulthood. Many adults have struggled with the problem and not been diagnosed. Dr. Kenneth Blum, researcher in brain chemistry and addiction, has co-authored a book with David Miller called Overload: Attention Deficit Disorder and the Addictive Brain.  David Miller discusses in detail the common symptoms, which include difficulty focusing attention, organizing tasks, following tasks to completion, inability to wait, hyperactivity, and impulsiveness. He also relates the problems associated with the consequences of these symptoms including underachievement, poor memory, low frustration tolerance, low self esteem, and life out of control. It is a compulsive disorder, usually genetic in origin, where the neurons in the brain have trouble communicating with each other.

Dr. Blum's research since 1990 has been focused on a genetic abnormality of the neurotransmitter system of the brain linked to feelings of cravings and addiction. The brain chemical called Dopamine has specific receptor sites that are altered with this genetic defect. A healthy flow of neurotransmitters from a brain without this receptor defect is called the Brain Reward Cascade. The “reward” results in feelings of pleasure, peace, and well-being. In brains with this genetic variation, an aberrant flow of neurotransmitters results.  This causes a lack of reward which  Dr. Blum has termed Reward Deficiency Syndrome (RDS). He feels that as many as one third of the population may display this condition.

This eye-opening book cites many scientific findings clearly showing the relationship of ADHD to alcoholism and other addictions.  David Miller, a clinician and counselor, is also a recovered addict diagnosed with ADHD who offers amazing insight into this connection. He also emphasizes the importance of early intervention and treatment of children with ADHD symptoms before they progress into the inevitable use of addictive substances like alcohol and drugs.

New scientific research is leading to innovative treatment programs that are faster, less costly, and show greater potential for lasting recovery. The most effective utilize a  multi-disciplinary approach, incorporating techniques that treat the patient holistically. The components of treatment for both ADHD and Addictions must be multifactorial addressing Spiritual, Mental/Emotional, Physical, and Biochemical/Metabolic needs.

Current research by Dr. Kenneth Blum and Dr. Jay Holder recently published in Molecular Psychiatry, a journal of Nature magazine, cites evidence that people in treatment for addictive behaviors can benefit from a Chiropractic treatment called Torque Release Technique. This technique utilizes a spring-loaded adjusting instrument approved by the FDA called an Integrator. Dr. Holder and a University of Miami biostatistician did one randomized placebo-controlled study at Exodus drug-treatment center in Miami. The results showed residents completing their treatment program at a remarkable 100% rate when Torque Release Technique was used in conjunction with nutrition, 12-step programs, and Auriculotherapy (ear acupuncture).

The disease of addictions and compulsive disorders affects more than 50 million people and costs our government over 300 billion dollars annually. This is considered to be our country's number one cause of death and crime. The jails are overflowing with addicts who commit crimes to obtain their drugs of choice, only to get released and return to their lives of addiction.  It is clear that more effective treatments are needed for this epidemic.

The C.Ad (Certified Addictionologist) credential has been earned by nearly 1,000 Chiropractors who are positioned to offer at least one major treatment component with their spinal adjustments.  Most of these Chiropractors are utilizing the Torque Release Technique as well as nutritional supplements and referrals to 12-Step programs.

Dr. Leslie Bedell has been utilizing Torque Release Technique in her office at Agape Chiropractic Healing Center since 2005.  She received her Post Graduate Board Certificatiion in Addictionology. Her office sees over 500 children as regular patients, many of whom have found help with learning challenges such as ADHD.  She has conducted clinical research with ADHD as well as Autism.  Trained by Cloud-Townsend Communications to facilitate small recovery groups and teach classes in Boundaries, she  facilitates Life Recovery Skills groups for men, women, and teens. Dr. Bedell works with other health professionals in order to offer multidisciplinary resources to adults and children seeking help for addictions and compulsive disorders.  She can be reached at 425-888-1670 and is available for speaking engagements. 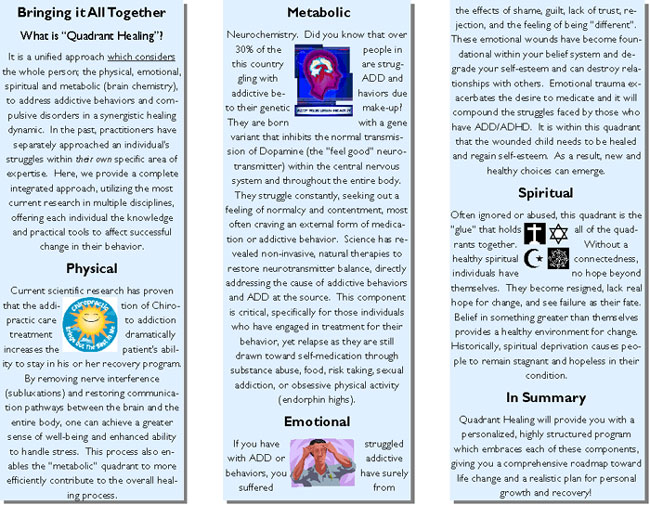